The announcement was made in Northampton as the station platform was dedicated in memory of former State Representative Peter V. Kocot who served in the Massachusetts Legislature from 2001-2018.

The service was first launched on August 30, 2019, making stops in Greenfield, Northampton, Holyoke and Springfield on its way to New Haven, CT. 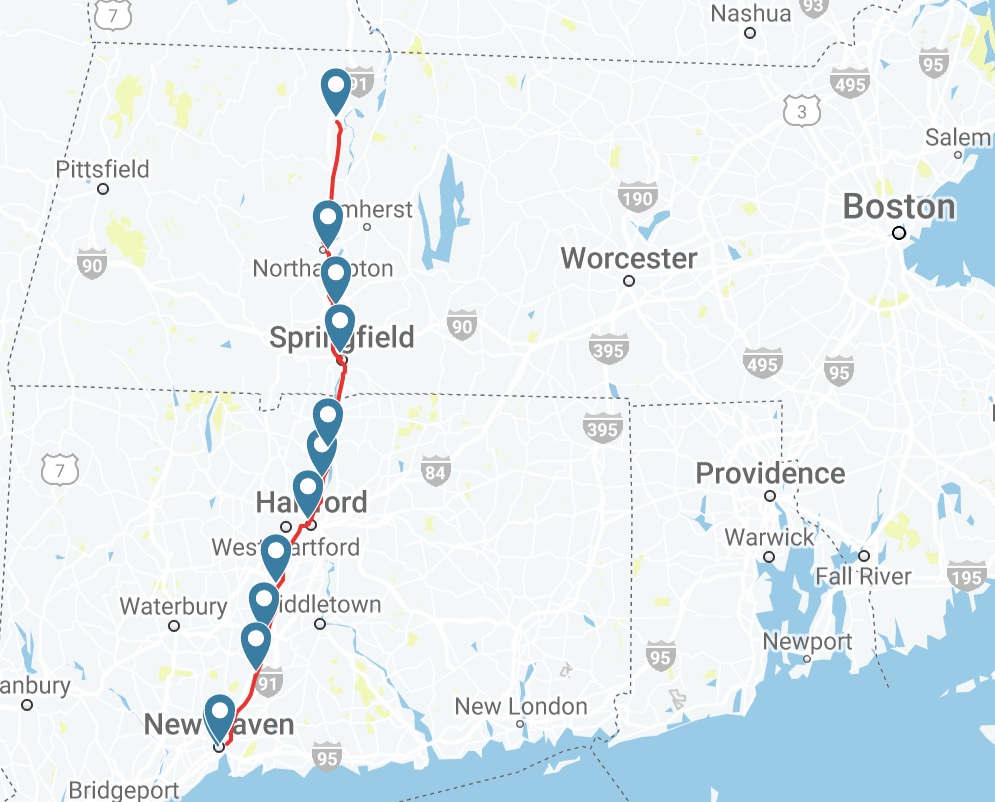 “The Baker-Polito Administration is pleased to be announcing the Valley Flyer Passenger Service will be permanent,” said Transportation Secretary and CEO Jamey Tesler. “The Commonwealth and Amtrak have had a strong partnership for many years to provide rail services in Massachusetts, connecting communities across the Northeast and beyond, and with the Valley Flyer service continuing, I see the partnership growing and getting stronger in the years ahead.”

“We launched the Valley Flyer with our partners at MassDOT with the expectation it would become permanent, and we are delighted that our joint vision has come to fruition,” said Amtrak Vice President State Supported Services Ray Lang. “We thank our customers for riding with us as their demand for train travel has helped provide numerous benefits to Western Massachusetts communities, residents, and visitors.”

“Representative Kocot was a steadfast advocate for Western Massachusetts,” said Congressman James P. McGovern. “Public transit and passenger rail were key priorities for him, and I could not think of a better way to honor his legacy than by dedicating Northampton’s train station in his memory and making Valley Flyer passenger service permanent. Connecting Western Massachusetts with the rest of the commonwealth and country not only celebrates Rep. Kocot’s memory—it improves the lives of the people here in the Pioneer Valley who he dedicated his career in public service to.”

Mrs. Shauneen Kocot stated, “Rapid transit was a very important issue for Peter. One of the last bills he filed was for a proposal to study the East-West Rail Service. Peter would be humbled to have the Commonwealth and the Department of Transportation dedicating the Northampton Train Station in his memory. My sons and I appreciate the efforts of everyone involved in this effort to remember and honor Peter.”

Northampton Mayor Gina-Louise Sciarra added, “Peter Kocot was a remarkable public servant with an incredible commitment and selfless drive to serve his constituents and the Commonwealth. He is dearly missed in Northampton as a stalwart colleague, dedicated community member and loyal friend. The City of Northampton is grateful to play a role in this well-deserved dedication of the Northampton Train Station in Peter’s honor.”

Amtrak, in conjunction with MassDOT, has been running Valley Flyer trains seven days a week along the Connecticut River, using a rail line referred to as the Knowledge Corridor, with trains making station stops in Springfield, Holyoke, Northampton and Greenfield. The travel option is an extension of Amtrak’s New Haven to Springfield service and offers residents and visitors of Western Massachusetts a more frequent and convenient way connect with Amtrak’s Northeast Corridor at New Haven and reach stations between New Haven and Springfield. The Valley Flyer is an intercity service designed to increase the Pioneer Valley’s access to the NY metropolitan area and other points on the Northeast Corridor. The service was initially offered as a pilot program which began on Friday, August 30, 2019, and was reduced during the pandemic, before resuming the full schedule on July 19, 2021. The Valley Flyer has two round-trip trains on weekdays, and one round-trip train on Saturdays and Sundays. The pilot was initially recommended in the 2018 Massachusetts State Rail Plan.

Ridership on the Valley Flyer has been strong during the past year. Although demand for passenger rail service across the Northeast is reduced from pre-pandemic conditions, the Valley Flyer has continually exceeded expectations, including meeting projected ridership and matching Amtrak service along the Northeast Corridor on its return to pre-pandemic demand. The Valley Flyer, which primarily serves passengers travel from Western Massachusetts to New York is on track to provide 24,000 annual trips for Fiscal Year 2023.

Over the past few years Amtrak has been working closely with MassDOT and the other New England states to improve service in the region. Recent advances include restoration of the pre-COVID-19 schedule on the Amtrak Hartford Line service to Springfield in April 2022, extension of the Ethan Allen service to Burlington, Vermont in July 2022, and implementation of the Berkshire Flyer this past summer, a pilot seasonal weekend service between New York City and Pittsfield.

The Northampton Train Station platform, located downtown at 170 Pleasant Street, was dedicated today in memory of former State Representative Kocot, who died at the age of 61 on February 21, 2018, after a brief illness. Mr. Kocot represented the First Hampshire District which includes the communities of Montgomery, Hatfield, Southampton, Westhampton, and Northampton.