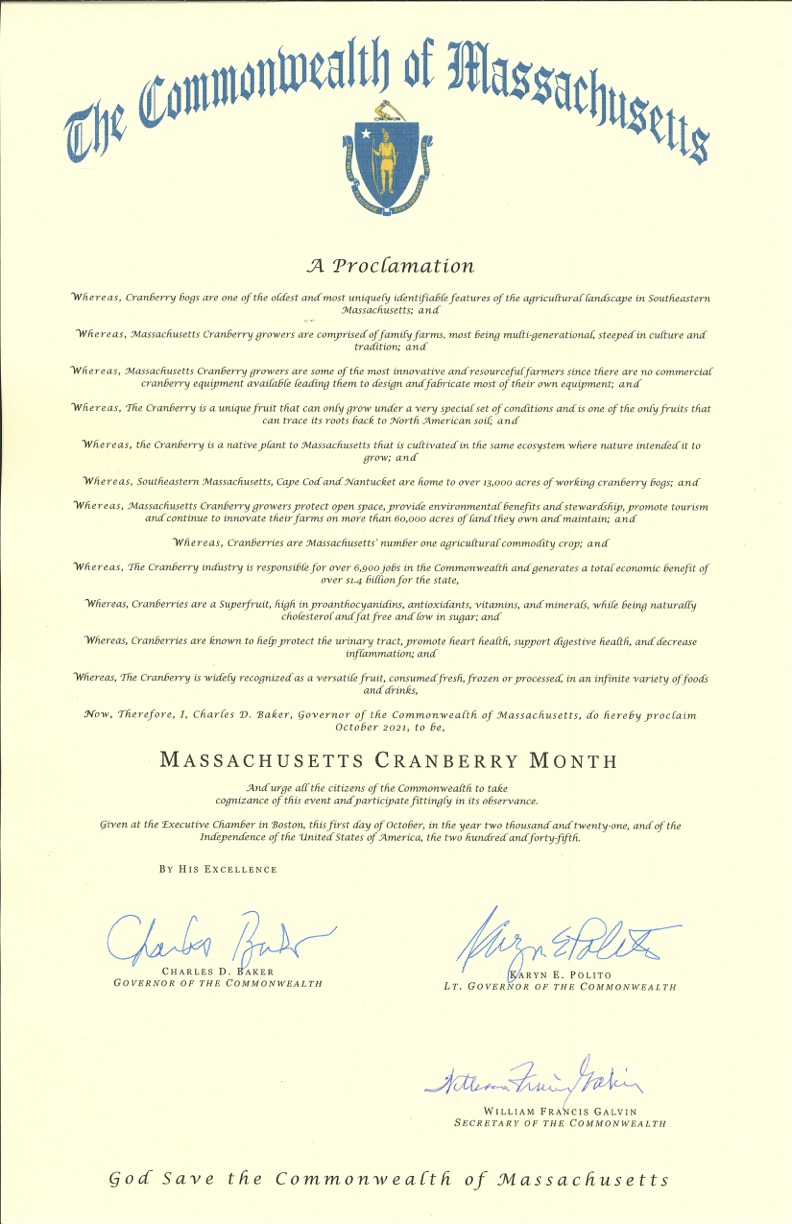 “Recognizing the cranberry as an important crop to the Commonwealth’s history and economy, the Baker-Polito Administration is once again proud to build on our longstanding support of the cranberry growing industry and ensure that the official state berry of Massachusetts continues to thrive for generations to come,” said Energy and Environmental Affairs Secretary Kathleen Theoharides. “Aside from it being a delicious and quintessential New England staple, the production of cranberries provides enormous environmental benefits to the Commonwealth and our local growers are true stewards of their land, incorporating the latest in technology and equipment to harvest their fruit in ways that conserves water and protects natural resources.”

In August 2020, the Baker-Administration announced $7.75 million in funding to support infrastructure upgrades, including the design, construction, retrofitting and outfitting of enhanced laboratory space, at the UMass Cranberry Station located in Wareham. The funding will be used by the Cranberry Station to modernize and expand its research facilities, improve the environmental profile of the facility, and provide the tools needed to support vigorous research programs in cranberry water, pest, and nutrient management. The Station is a vital outreach and research center charged with the mission of maintaining and enhancing the economic viability of the Massachusetts cranberry industry. While construction for this renovation project is already underway, plans for an official groundbreaking ceremony are planned for later in the month.

The Massachusetts’ cranberry industry, through crop production, processing and manufacturing, is a major sector of the state’s agriculture economy. Additionally, increasing the efficiency of water use in cranberry production is key to conserving water, while minimizing off-target movement of nutrients and pesticides, which will help to preserve water quality and ensuring the sustainability of cranberry production in the Commonwealth.

“Whether served alongside a Thanksgiving Day dinner, in dried form on top of a salad or consumed in a glass as a beverage, the cranberry is a versatile fruit that has been enjoyed for generations here in Massachusetts and across the country,” said MDAR Commissioner John Lebeaux. “Taking place from late September to early November, the cranberry harvest season coincides with the fall foliage season, providing a double dose of visual splendor and making October the perfect month to celebrate.”

“Although our growers are nurturing the native perennial cranberry vines the whole year through, we once again are honored that the Commonwealth has recognized our industry in its most identifiable harvest month, October,” said Brian Wick, Executive Director of the Cape Cod Cranberry Growers’ Association, serving growers from all of Massachusetts. “With record rains this past summer, this year’s cranberry crop faces the opposite challenge from last year when there was a drought. Still, the industry has seen strong domestic sales of cranberry products this past year as a result of consumer interest for healthy, immune-boosting products which cranberries naturally deliver.”

Following recommendations from the Administration’s COVID-19 Command Center’s Food Security Task Force, which promotes ongoing efforts to ensure that individuals and families throughout the Commonwealth have access to healthy, local food, the Administration in June 2020 launched a new $36 million Food Security Infrastructure Grant Program to address urgent food insecurity for Massachusetts residents as a result of the COVID-19 pandemic. Since January 2021, through six funding rounds, the Administration awarded over $35.5 million to support over 360 projects to increase food security in the Commonwealth, including four awards to Massachusetts cranberry growers. The administration recently announced a second round of the program, funded at $15 million for FY22. The program is currently accepting applications through October 31, 2021.

“I am very grateful for Baker-Polito Administration’s continued support of cranberry growers and the cranberry production industry,” said Senator Michael J. Rodrigues (D-Westport), Chair of the Senate Committee on Ways and Means. “Their longstanding championing of vital programs such as the UMass Cranberry Station and the agricultural cranberry enhancement grants to support growers revitalize cranberry bogs have helped keep this unique industry – critical to Southeastern Massachusetts – thriving and on the cutting edge of agricultural technology.”

“Here in the Commonwealth, and especially in the Southeast region, the cranberry is the backbone of our regional agricultural sector,” Dean of the Massachusetts Senate Marc R. Pacheco (D-Taunton). “With over 13,000 acres of commercial cranberry bogs in Massachusetts – primarily throughout Plymouth, Bristol, and Barnstable counties – I am very pleased that we are taking the time to recognize our statewide cranberry industry by officially declaring October ‘Massachusetts Cranberry Month’. Many thanks to all the growers, farmers, and agricultural workers who have helped make the cranberry synonymous with the Commonwealth of Massachusetts.”

“The cranberry industry has been of vital importance to agriculture in the Commonwealth and especially here on the south coast,” said State Representative Susan Gifford (R-Wareham). “We are grateful to have an Administration that recognizes the important role cranberries play in our economy and the challenges that face our growers. I was honored to have served as a member of the Cranberry Revitalization Task Force.”

“Cranberries and cranberry growers have been an important part of our regional history and economy for more than 200 years, and with continuing state support, Massachusetts bogs should continue to serve as one of the top producing regions in the world,” said State Representative Bill Straus (D-Mattapoisett), Co-Chair of the Cranberry Station Board of Oversight.

In October 2019, the Administration announced $991,837 to 21 cranberry growers for bog renovation projects MDAR’s Massachusetts Cranberry Bog Renovation Enhancement Grant Program to help renovate existing cranberry bogs, providing higher yields and more efficient methods of cranberry production for participating growers. Furthermore, in June 2017, the Massachusetts Cranberry Revitalization Task Force released its final report with recommendations to preserve and strengthen Massachusetts’ cranberry industry. The Task Force, composed of 18 government officials and stakeholders within the cranberry industry, was created by the Legislature in July 2015 to examine the status of the industry and the complex challenges ahead, and to develop a multi-pronged action plan geared toward stabilizing and revitalizing the cranberry industry